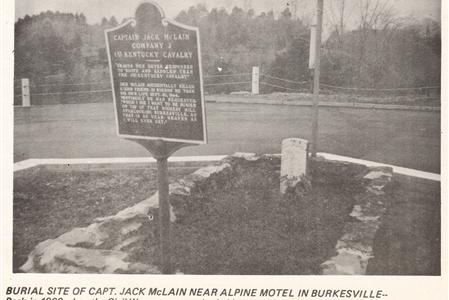 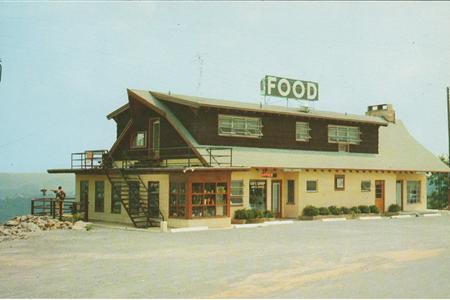 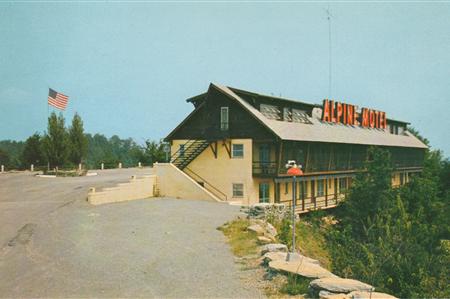 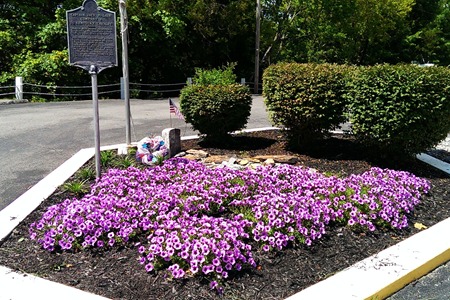 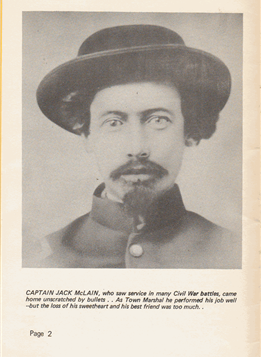 From a paper insert issued in 1953 introducing the new Alpine Mountain View Motel:

Turn The Key To Friendly Hospitality And Luxurious Lodging

Your Stop Enroute From Mammoth Cave To

The Great Smokies Or Cumberland Falls

The shortest, best and most scenic route with the least traffic from the Great Lakes region to the Gulf and Florida is trough Burkesville, Kentucky.

The Motel is now in full operation with the finest overnight accomodations to be found anywhere – Come to Kentucky for your vacation, where hospitality is a habit as old as Kentucky herself.

COMPARE THE PRICES, COMPARE THE FEATURES AND YOU WILL AGREE IT IS THE BEST PLACE IN KENTUCKY TO EAT AND SLEEP. LOCATED BETWEEN THE LAKES.

WHETHER FROM NORTH, SOUTH, EAST OR WEST YOU WANT TO STOP AT THE ALPINE MOTEL FOR OVERNIGHT SLEEPING COMFORT AND THE SOUTH'S FINEST FOOD. – YOU MAY HAVE WITHOUT CHARGE A MILLION DOLLAR VIEW OF MOUNTAINS, STREAMS, VALLEYS AND PLATEAUS

THIS UNIQUE MOTEL IS THE PRIDE OF SOUTHERN KENTUCKY

An Outstanding Tourist's Mecca Reached By A Paved Road 50 Yards Off Highway No. 90 – Adequate Parking Space

NEITHER PAINS; NOR EXPENSE HAS BEEN SPARED TO MAKE THE ALPINE MOTEL THE MOST ATTRACTIVE PLACE IN KENTUCKY

Affording A Vista of the Beautiful Cumberland Mountains

The historic grave of Captain Jack McLain, Co. J, 1st Kentucky Cavalry, whose strange but fulfilled request, that he be buried on top of the highest hill overlooking Burkesville, Kentucky, as that was as near Heaven as he would ever get, is one of the most interesting and dramatic episodes following the Civil War. The grave is located near the Inn.

“TELETALK” CONNECTION IN EVERY UNIT FOR PROMPT SERVICE

Single and Connecting Rooms, Suites and Apartments With Choice of Tub or Shower

The Dining Room, under separate roof, is on the ground floor level, with large open fireplace and plenty of picture windows, It is air-conditioned, as is also the Coffee Shoppe and Fountain Bar adjacent to the Dining Room.

ALSO PRIVATE DINING ROOMS AVAILABLE. The food is prepared by a trained chef and is unexcelled. Everything modern science can furnish for your comfort, Health and enjoyment is available at the ALPINE MOTEL. Cool nights out of the sound of traffic.

AT THE OFFICE MAY BE FOUND A COMPLETE LINE OF NEEDED ITEMS SUCH AS – MAGAZINES, KODAK FILMS, CARDS, STAMPS, LARGE SELECT LINE OF SOUVENIRS, CANDY, CIGARETTES, ETC.

BURKESVILLE, the best LITTLE town in Kentucky, is also one of the oldest. She sends you the welcomes of the ages blown from the orange-red of the Trumpet Flower, the plumes of the Golden Rod and the throat of the Cardinal, sybols of a gracious hospitality for which Kentucky is famed.

Located on the “John Muir Trail” traversed by the famed naturalist in 1867 on his famous “Thousand Mile Walk of the Gulf.”

Three miles north of Burkesville is “First Night Hollow” where the settlers spent their first night in the untamed wilderness.

Three miles north of Burkesville is the site of the First American Oil Well, where in boring for salt a gusher was struck, the oil flowed out into the Cumberland River, caught on fire and was the greatest spectacle ever seen in these parts.

From atop the Big Hill overlooking Burkesville you have a fabulous view of the Palisades of the Cumberland River with its Lover's Leap, where romance and courage caused the fatal leap of a lover and his girl friend.

From Grave To Grandeur

Used by permission of the Courier-Journal – December, 1952

The rugged top of the Big Hill behind Burkesville, Ky., has changed quite a bit since, at his own request, Capt. Jack McLain was laid to rest there some 86 years ago. Then, when McClain was buried at the foot of a lone pine tree on the top of the Big Hill, it was a steep rocky barrier that completely hemmed in Burkesville on its immediate back side.

A road of sorts, narrow and tortuously crooked, snaked over the hill and toward Glasgow, 38 miles to the west. Because of the abruptness with which the Big Hill rose up from the flat Cumberland River bottoms, along which Burkesville was built, it seemed even higher than its 1,000-or-so feet. In time it became a scenic landmark known all over Kentucky.

Fog rolling in along the Cumberland often shrouded the Big Hill, making it appear that its rocky top reached up to touch the sky.

Maybe that's the reason Captain McLain asked, as he lay dying, to be buried there on the very peak. For, as he put it, “that is as close to heaven as I will ever get.”

Anyway, McLain, a Union Civil War captain, was buried under the lone, scrubby pine on the hill top in September, 1866.

But things, like times, change. Even the pinnacle of the Big Hill has undergone a transformation since that deathbed request was fulfilled.

No longer is the Big Hill a remote, silent little world to itself. It still towers up over Burkesville as always, only now it is flooded with light and is the scene of considerable commerce as a modern motel, which should be one of Kentucky's finest. It is being built almost as the food of Captain McLain's grave.

This change goes back nearly 25 years to a promise Less McComas, a Burkesville automobile dealer and retail grocer, made when he bought the Big Hill.

“If a bridge is ever built over the river here and we get good roads enough to bring tourist this way,” he said in effect, “then I'll build the best motel money can buy on the top of that hill.”

Actually, McComas never really expected that promise to come home to roost. After all, at that time Cumberland County, of which Burkesville is the seat, was called the “forgotten county” because of its poor roads. A ferry out of operation during high water, provided transportation across the river. Tourists were conspicuous by their almost total absence, even though an awful lot of the raw ingredients that attract travelers were present in the region.

Then, in 1942, the first of several big things came to pass. Work was started that year on a dam across the Obey River to the south in Tennessee. The water backed up by the dam created a reservoir 63 miles long that extended crystal-clear arms up into Kentucky and to within nine miles of Burkesville.

Dale Hollow, the name given this lake, soon became famous all over the country for its fine fishing. Tourists began to move into the lake country. Roads in the Burkesville section were improved.

But the changes were only just starting.

Next, a dam was built across the Cumberland in Russell County upstream from Burkesville. That Dam, Wolf Creek, created a scenic reservoir 101 miles long and put arms of water only 15 miles from the town. The dam itself is only 20 miles north and east.

A still heavier flow of traffic started coming the way of Burkesville. The roads were patched up even more.

The latest turn in events came over two years ago when the long-dreamed-of bridge on Kentucky Route 90 was started over the Cumberland just below Burkesville.

And in July, 1951, Less McComas started workmen scratching away at the solid rock on top of the Big Hill—smoothing it down for the development he had vowed to make such a long time ago.

The motel hugs the very brink of the Big Hill and affords a seemingly bird's-eye view of Burkesville and the broad Cumberland Valley in the distance.

Jack McLain's grave, from which he hoped to be so near heaven, stands almost in the middle of the motel parking area. It will be left alone except for dressing up with a new rock wall, some grass, a brass plaque containing the legend of his death and a new pine tree.

Eighteen feet under the rim of the hill on the northeast side is the house Mr. and Mrs. McComas are building for themselves. It is being built on two levels on a 20 foot wide shelf of rock that literally was chisled from the side of the hill.

The house will resemble a Swiss chalet, with a promenade all across the lower level on the side overlooking the town.

McComas admits he has sunk a lot of old-fashioned folding money in the motel project. But he believes the Burkesville section, rich as it is in history and scenery, is a coming tourist area of Kentucky.

First of all, there are two big lakes nearby and the lure they hold out to fishermen and those who like water in economy, king-size packages.

And then there is the history with which the immediate Burkesville section drips.

Three miles north of town, on the road to Columbia, is the marked site of the Great American Oil Well, the first oil gusher in the world. It was struck in 1829. Just below the oil well, at the point where Big and Little Renox Creeks empty into the Cumberland, is the spot where pioneers fought a battle with the Indians. The rock-bound graves of the settlers who fell could be seen for many miles.

Nearby also is the house where Joel Cheek, the first man to develop blended coffee lived for many years as he traveled through the mountains for a Nashville grocery firm. The 144-year old Salem Church is not more than three miles from the center of town. Fourteen miles up Cumberland is the famed Rock House, a tremendous water-level chamber that has been formed in a sheer-faced rock cliff.

The Cumberland County Courthouse contains many interesting and historical records. To be seen is the bond signed by Thomas Lincoln, father of the 16th President, when he became constable of the county in 1804 and again in 1806. Also on file is a record of a tract of land taken up by Thomas Lincoln in 1807.

Local legend holds that Abraham Lincoln actually was born in the lower part of what then was Cumberland County but which since has become Monroe County. Lincoln scholars, however, say that is only legend.

The whole town seems to believe a new day, with tourist dollars galore, is just around the corner or thereabouts.

That fine, new bridge and the improved roads proves Cumberland no longer is the forgotten county.

The brow of the big hill had to be cut down about 11 feet in order to level space large enough for the various buildings and the parking area. Foundation work started in April of 1951.

NOTE: Since the above article was written the Alpine Motel has been completed and is now open.